Tradition and the Bible

When you tell your Protestant friends or relatives about the “Traditions” of the Catholic Church you’re likely to receive some attention. The antithesis to a church that relies on the “Bible only” is not a church that relies on “Tradition only.” That is what most objectors to Catholicism would like others to think – that we believe that Tradition somehow trumps the Scriptures. That couldn’t be further from the truth. 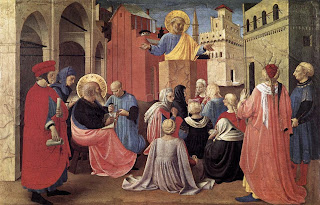 One thing to bring up is that Protestants actually believe in Tradition more than they think. In fact, using the Bible at all is a step of faith in the Traditions of the Church. Why? Because there is no way of determining what books belong there in the first place, that is, which writings of the early Church are inspired or not. The Bible existed long before the Reformation and was trusted as “inspired” long before Luther removed certain books. Aside from that issue, the very fact that Protestants have the Bible at all is virtue of Tradition and the authority of the Church. How else did they receive it? There is no place in the Bible itself that names which books belong there. And in addition, to assert the notion that, “we know in our hearts which books belong” as Calvin, the Geneva Reformer wrote, is the same sort of self edifying gobbledygook the Mormons use to justify their “inspired” texts.

That point has to stick in the minds of any honest reader. If the Bible were the only source that we need to be guided to salvation, where is the unity among Protestants? If one disagrees with a particular interpretation there is often one more division. The Holy Spirit is not a spirit of division! If someone disagrees with that branch from there, another division starts. Sooner or later the religion and system is unrecognizable. One only needs to look at Lutheranism next to a modern Reformed Baptist to see the fruits of Bible only teachings. One was supposed to be the real deal, and problem solver, but then came along another dissident believer who saw things differently.

And here is the point: if the Catholic Church is so wrong in its authoritative structure, how come we still teach the same doctrine for close to 2000 years? That must count for something to any discerning heart.

Worried about ‘The Gospel of Jesus’ Wife’? Don’t Be

Did You Know That Jesus Had No Faith?

7 Reasons to Believe in Mary’s Ever Virginity